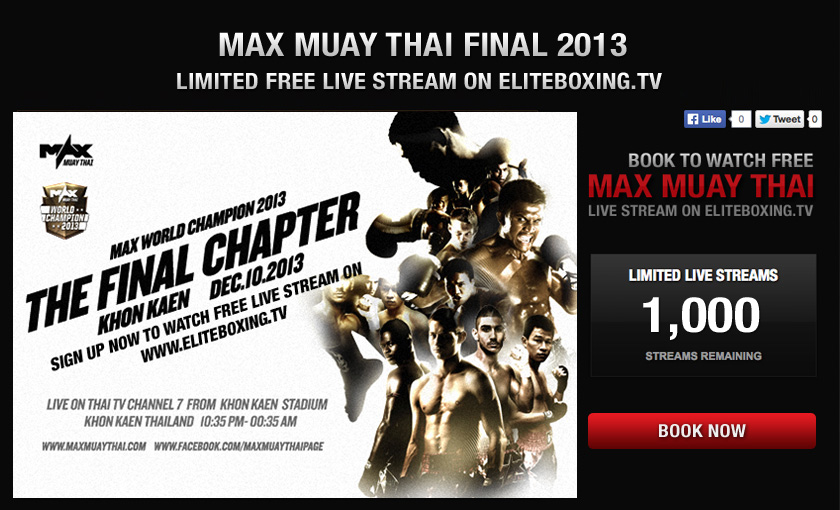 ​
Free Live Stream Max Muay Thai : Final Chapter will be broadcast live in Thailand on Channel 7 and internationally on EB-TV. As part of an exclusive agreement with Elite Boxing, fight fans around the world will receive access to a free HD stream of the event with English commentary after register on EB-TV.

The third of three 4-man tournaments, the Max Muay Thai 2013 final will feature Saketdaw Phetphayathai of Thailand, Andrei Kulebin of Belarus, Victor Nagbe of Australia and Dylan Salvador of France in what is a truly international line-up.

Also included in the day’s entertainment will be four superfights, the highlight of which will see Thai Muay Thai legend Buakaw Por Pramuk (Banchamek) taking on upcoming German superstar Enriko Kehl. Having already established a reputation for himself as a slayer of Thai fighters during Elite Boxing events over the last couple of years, Enriko is set to go toe-to-toe with Buakaw, one of the biggest names in Muay Thai from recent times. Buakaw has himself only recently resigned from Max Muay Thai’s main competitor, Thai Fight, after having previously also fought in Elite Boxing events.