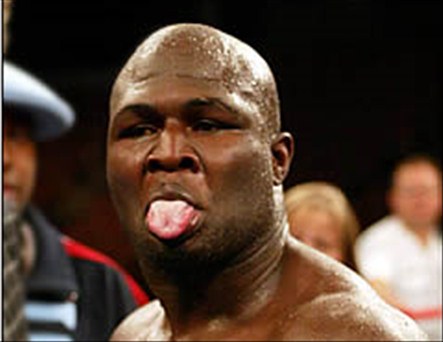 "Yeah, it's true... I got tapped by Toney in training. It's just training... no more questions!!! Lol... Subs happen..."
​
"King" Mo Lawal details how he tapped to a standing guillotine courtesy of James through his Facebook page. Toney recently made the transition to the Octagon to prove, well, something I assume.
He's apparently making progress, but there is just one problem: "Lights Out" has yet to sign his bout agreement to fight Randy Couture at UFC 118, which is set for August 28, in Boston, Massachusetts.
From MMA Live's Gareth A. Davies:

"Well I got a little disturbing news when I called the UFC for a little bit of a round up this morning is that James Toney is dragging his feet over the bout agreement signing with Randy Couture, which I think is bad news... Well it's a lot of hot air from James Toney; he wanted to be in it, why is he dragging his feet. That needs to be cleared up very soon."
​
Is Toney pulling a card from his boxing playbook with the delay tactics, or is he just too busy getting up to speed on the nuances of the sport to ensure that UFC 118 doesn't turn out how most fight fans expect it to?
Click to expand...

UrbanBounca said:
If he'd tapped a decent fighter, it would be worth mentioning, but 'King' Mo is a bum, especially on the ground.
Click to expand...

This is how lights on nobody home tapped out Mo.

hommage1985 said:
The hold up is the weight. Toney and Randy want different catchweights.
Click to expand...

I don't think Randy could care less which weight it's on. He can make 205 or 220+. Looks like a stalling tactic on james' side.
M

Joined Sep 28, 2009
·
525 Posts
Of course he can tap out a Wrestler with a standing Guillotine. He's a big, strong guy and wrestlers shoot with their heads down 90% of the time. Any big, strong guy can tapout anybody with a Guillotine.

This fight won't happen. Toney knows his mouth has made a bet that his ass can't cash. Regardless of the fluke tapout of a clearly inferior Mixed Martial Artist, Toney has to know that he has no chance against Couture. Him dragging his feet to actually sign the fight is him knowing he's not even in the same galaxy when it comes to Couture and MMA. 205, 220, 230, whatever weight Toney wants to fight at, Couture will brutalize him.

Joined Dec 3, 2006
·
706 Posts
This is one of those, "who really cares" situations. No offense to the TS, I know it was posted by media and this is a classic example of them trying to make a story where there isn't a story. The guy I train with is a better wrestler than I am, but I take him down in practice sometimes...doesn't mean that if I go fight a high level wrestler I am going to be able to take him down.

If Tony had been grappling with someone like say Maia or Jacarre in practice and submitted them then I would be impressed, but Mo isn't even known for his submissions. He's just a glorified wrestler in the minor leagues of MMA.