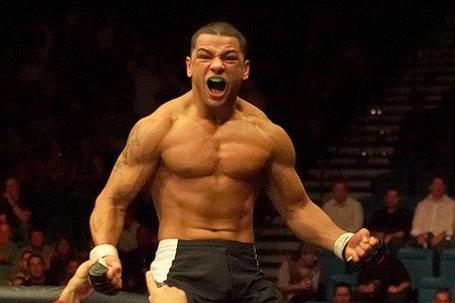 Former welterweight number one contender Thiago Alves will be required to undergo minor surgery to correct the brain "irregularity" that prompted his withdrawal from the UFC 111 fight card last Thursday.
TMZ Sports -- who broke the initial story regarding "Pitbull's" condition, first reported the update earlier today.
The Brazilian was pulled from his March 27 fight against Jon Fitch after failing a pre-fight CAT Scan and promptly sought out additional tests from brain specialists to help determine what action needed to be taken -- if any.
Now it appears that Alves will have an angiogram at the Hyman Newman institute for Neurology and Neurosurgery located at Roosevelt Hospital in New York.
The outpatient procedure is scheduled to take place next Wednesday (March 31) to correct the malformation of the left side of his brain, as reported by Tracy Lee from a March 26 press conference held by Alves.
He is expected to be cleared to resume training in as little as three weeks.
Great news.

After the NJ Athletic Commission denied Alves a license to compete, UFC officials were forced to scramble to replace a very large hole on the UFC 111 fight card. Opponent Jon Fitch offered to move up to middleweight to help widen the chances of the promotion finding a suitable replacement, but in the end it wasn't necessary.
Enter Ben Saunders.
"Killa B" jumped on the opportunity to leave Jake Ellenberger high and dry to throw hands with the former collegiate wrestling standout -- and raise his stock considerably with a possible win over the former top contender.
Ellenberger was compensated for his efforts despite seeing no action this Saturday night.
In addition, the lightweight scrap between Kurt "Batman" Pellegrino and Fabricio "Morango" Camoes has been promoted to the main card, leaving the Newark event at total of ten bouts.
Click to expand...


Wow, I thought he maybe had a problem with his weight cut but dam I wish him nothing but the best.

Joined Sep 14, 2009
·
91 Posts
could someone dumb this down for me? don't feel like researching what those medical terms mean.
A

Joined Mar 27, 2010
·
7 Posts
glad to hear it is somewhat minor, I was worried when I heard about his "brain irregularity".

I think it has to do with an artery in his brain, which implies that he was at risk for an aneurysm. I also believe that he had been cleared to fight in every state but New Jersey, whatever that means.

Joined Jan 16, 2007
·
291 Posts
Alves "headed" for surgery. ahhhh accidental humour is awesome hope Alves is back to his fighting best soon and gets to **** up Fitchy.