Now that we have a middle weight UFC champion in Israel Adesanya performing naruto summoning jutsus and Death Note memes in the cage.

I think we might acknowledge there could be one area anime/manga might have to contribute to MMA and martial arts. It involves eastern fictional authors investing more time and energy into researching and educating themselves on topics related to martial arts, in contrast to your average MMA or martial arts commentary/coach. Authors of the genre have a better grasp of the history of martial arts. Sometimes: insight into the science and psychology of fighting.

Below is an attempt to cite an example of this. (Originally written in japanese its read right to left, the opposite of american comics)

One character rapid fire throws kunais. Which are a japanese farmer or working class improvised shuriken or ninja star. The kunais impact on the eyes of a summoned edifice. Its a big disembodied head. Like the japanese comic version of the giant heads on easter island.

Its mentioned Itachi throws his kunais to target blind spots in a person's vision. Rendering them unblockable/undodgable. Decent life hacks.


So what does targeting blind spots in a person's vision mean?

I think its represented to a degree by the image below.


When focusing on a black dot. You'll notice other dots on the periphery of vision become less visible. Or disappear.

This could depict blind spots in vision, of which we are not usually aware exist.

In theory, it might be possible to note where a person's eyes are focused. And plot a path for a punch/kick/elbow/knee that skirts along the blind spots in their vision. To guarantee they never see it coming.

In manga/anime characters like Itachi have special eye abilities which automatically calculate distance/speed/geometry to make it feasible. For normal people it could be completely impossible and not worth bothering with.

I hope this gives people an impression of how there might always be room for growth and improvement in MMA and martial arts in general.

There will never be anyone in MMA or martial arts who has all the answers and knows everything. And sometimes in those gaps of knowledge there could be useful things people never really thought of.

Joined Jun 6, 2009
·
17,412 Posts
Israel Adesanya is a major fan of many different franchises so I don't think there's necessarily any connection between his doing anime gestures and his technique. Remember he is similar to an in his prime Anderson Silva, maybe better.

You could try reading.

Joined Jun 6, 2009
·
17,412 Posts
Okay based on that post I believe that there are some small time anime authors that have created MMA inspired works.

Joined Dec 15, 2009
·
7,005 Posts
Western storytelling revolves more around people being entitled to make bad decisions and have second chances in life. You'll see it in many movies and tv series where someone makes many bad choices and one day they decide to turn things around. Then they live happily ever after.

Eastern storytelling revolves more around tragedies and how a single unintended bad choice can lead to horror, death and suffering. Eastern storytelling is generally much more zero tolerance. Perhaps as a result some asians may be prone towards paralysis through analysis and being too conscious of the effect their choices have on society and the world. Which could be part of the reason their birth rates are on the decline, although there are many other factors and variables that apply.

I'm not here to say eastern culture is better than western culture or anything like that. They both have their positives and negatives.

Western storytelling might cause people to take things for granted, not appreciate what they have and feel entitled to have things they haven't earned or don't deserve. People might feel like a character in a book or movie who is entitled to make bad decisions and be rewarded for it.

Eastern storytelling might cause people to take everything way too seriously and obsess over little details that aren't important. It might encourage paranoia and anxiety over micro managing details. Because of how their storytelling culture can revolve around tragedies and how bad decisions lead to them. The emphasis can become more about not ever making a bad decision, rather than making good decisions.

Anyways that's only the tip of the iceberg. There could be a lot of bad influences in eastern and western storytelling. And perhaps some good influences as well.

Isn't it interesting though how MMA champions started out being people "from the streets".

Now MMA some champions are like manga and anime geeks. Israel Adesanya isn't the only one. Michael Venom Page and many others could be vaguely included in that category as well.

Joined Jun 6, 2009
·
17,412 Posts
You are specifically talking about western redemption stories and eastern tragedies which are only two genres of stories in both cultures. I do agree that Asians have a tendency to take themselves way too seriously in certain stories but that's definitely not across the board as many anime/manga even though serious include some comedic elements.

Joined 3 mo ago
·
11 Posts
I personally like both of them: manga and anime but most I like anime because It has so many great things going for it. Powerful themes, well developed and realistic characters, an absolutely stunning aesthetic and visuals, great music, cohesive plots, and a vast variety of different topics to capitalize on. But the one ultimate reason that I hold anime close to me, despite all the various great things to it beyond this, is the messages it tells in its stories, in its characters, in its episodes and chapters. I also like that I can watch anime online on KissAnime with all my friends and together is much funnier.

Joined Jun 6, 2009
·
17,412 Posts
Well in most cases anime are adaptions of manga but there are anime that are sand alone from manga.

Let it be known there is better out there people would not expect.

Joined Jun 6, 2009
·
17,412 Posts
Well one needs to remember that anime is fiction and that the fighting techniques in such media would have to be very basic in order to be adapted for an actual fight. For example almost nothing in the anime One Piece could be adapted because of the crazy nature of that show. Another example is the Naruto sprint can't be adapted either.

kantowrestler said:
Well one needs to remember that anime is fiction and that the fighting techniques in such media would have to be very basic in order to be adapted for an actual fight. For example almost nothing in the anime One Piece could be adapted because of the crazy nature of that show. Another example is the Naruto sprint can't be adapted either.
Click to expand...

There are things in One Piece that could be applied to MMA.

There are legendary old school boxers who said things that directly parallel some aspects of combat in One Piece.

Anime is ok if you can get over the japanese obsession of sex with robots.

Joined Jun 6, 2009
·
17,412 Posts
Well remember that like American cartoons, anime is a reflection of the culture that it comes from and the Japanese culture is obsessed with robots and sex. Just look at Vultron, Transformers, Power Rangers, Godzilla and various other manga, anime and other stuff. Also when I talked about One Piece, I was talking about things like devil fruits.

kantowrestler said:
Well remember that like American cartoons, anime is a reflection of the culture that it comes from and the Japanese culture is obsessed with robots and sex. Just look at Vultron, Transformers, Power Rangers, Godzilla and various other manga, anime and other stuff.
Click to expand...

Japanese culture tries to make geeky and nerdy topics like science and engineering cool. Its a big part of why their cellphones and technology are usually much better than ours. Western culture. I don't even know what western culture is about anymore. I guess western culture is all about having a humongous ass like Kim Kardashian.

kantowrestler said:
Also when I talked about One Piece, I was talking about things like devil fruits.
Click to expand...

This says cells and muscles produce energy more efficiently with spinach being included in someone's diet. 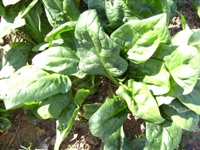 (PhysOrg.com) -- After taking a small dose of inorganic nitrate for three days, healthy people consume less oxygen while riding an exercise bike. A new study in the February issue of Cell Metabolism traces that improved performance to increased efficiency of the mitochondria that power our cells.

One of many examples of how fruits/vegetables/plants can give someone an edge. (If you can find a good source of spinach that isn't heavily saturated with pesticides anyway)

Think about the fruit Eve eats in the garden of eden in the bible. The specialized diet of humans is a huge part of what allowed us to develop larger brains.

Scientists always say there could be a cure for cancer that lies undiscovered in the amazon rainforest or remote regions of the globe. What they really mean is, there could be a plant or fruit that we haven't discovered yet that cures cancer. A high percentage of modern medicine relies on chemicals/drugs derived from plant life.

Biblical prophets living to be 600 years old in the bible, could be diet related.

So yeah that shit could be real to some degree. Without going into details.

Joined Jun 6, 2009
·
17,412 Posts
Dude, devil fruits in the One Piece universe give people super human and in some cases supernatural powers. THAT is not realistic.

The tree of life: 13 Bible verses about Tree Of Life

Joined Jun 6, 2009
·
17,412 Posts
How did we seriously get from talking about a fictional Japanese comic and animated series to talking about the books of the bible? I believe in the bible as well and have read it more then that but we need to remember that those stories are called miracles for a reason, they're exceptions to the rules of this universe. Also I doubt the free of life gives rubber.

Joined Dec 15, 2009
·
7,005 Posts
Nature is so freaky. The world can be a strange and mysterious place. Superhuman abilities and the supernatural fit the universe perfectly without citing religion or the bible imo.

Examples of superhuman being a real thing. Some people have a natural immunity to AIDs/HIV:

Immune to HIV: How Do They Do It?

How is it that the immune systems of some seem impervious to a virus that kills 2 million people around the globe each year?

Tibetans have a high altitude gene which supposedly gives them superior cardio.

What about the supernatural.


"Bobby Brown says he had sex with a ghost."

Guillermo del Toro describes his real-life encounter with a ghost

While we were talking to Guillermo del Toro about his latest horror creation Mama, the monster-maker started telling us about his real-life experiences with the paranormal. Turns out del Toro has had two separate paranormal experiences. Read the whole story, straight from the source, in our...
io9.gizmodo.com

I guess it is weird. Never thought of it that way, before.

Joined Jun 6, 2009
·
17,412 Posts
I try to legitimately try to search for truth and have found that in Christianity and have made a legitimate effort but trying to use examples in the Bible as reason as to why combat in a fictional comic series is based on fact is a little out there. Normal people can't turn their bodies into sand, fire or smoke. The Bible is nowhere near that fantastic.
1 - 20 of 22 Posts
Join the discussion
Continue with Facebook
Continue with Google
or sign up with email
About this Discussion
21 Replies
3 Participants
Last post:
kantowrestler 21 d ago
Mixed Martial Arts Forum
A mixed martial art forum community dedicated to the different arts of MMA. Come talk about UFC results, Bellator matches, The Ultimate Fighter and more!
Full Forum Listing
Explore Our Forums
UFC General MMA Discussion Training & Nutrition Bellator MMA MMA Forum Fantasy Fight League (FFL)
Recommended Communities